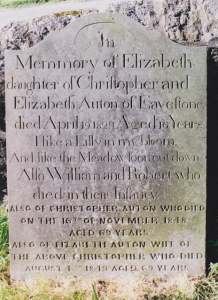 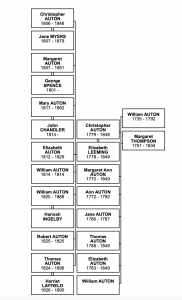 Farmer.  Worked in Russia for a number of years

1832 Occupier of Land at Eavestone, Yorkshire at the rent of 50 pounds a year

1832 Christopher AUTON experienced the political impact of the Great Reform Act.  This was a step toward democracy in England and Wales extending voting rights to shopkeepers, tenant farmers, and landowners of smaller aceages.  It brought the middle class into the political system.

1848 Occupier of Land at Eavestone, Yorkshire at the rent of 50 pounds a year

In Memory of Elizabeth, daughter of Christopher and Elizabeth AUTON of Eavestone died 19 April 1829 age 16.  Also William and Robert who died in their infancy.  Christopher AUTON died 16 November 1848 age 69.  Elizabeth, wife of the above Christopher died 4 August 1849 age 69

10.3.5.2.2 Thought to be a letter from Joseph William AUTON who had a farm called ‘Clearwater’ in Queensland, Australia perhaps sent to Myers AUTON in New Zealand