Samuel (know as Sonny or Sam) went to war with his friend George STEWART.  George and Sam were both killed in the War.  George’s wife May WILCOX later married Sam’s father Isaac Samuel THOMAS.

An English girl showed up in New Zealand.  She said that she had married Sam there.  Sam was dead so there was nobody to dispute her.  She became part of the family but there was some doubt about her story. 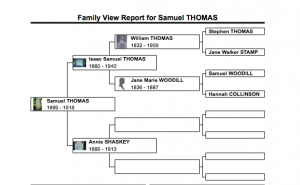 No information about Betsy THOMAS or her family seem right. There is a Frederick George Valois who married a Jannie Thomas in 1917 but the dates of children seem too close.

Isaac Samuel THOMAS and May WILCOX 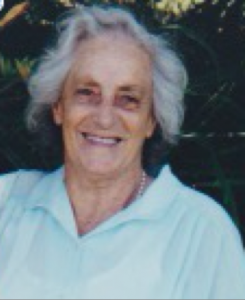 Conscripted with one day’s notice.  Chose to go with his friends rather than go later by himself.  900 men went to camp and got there finding there was no issue.  They slept eight to a tent with wet blankets which had to be folded rather than hung outside.  Bill got measles and was sent home.  He was then sent back to camp only to be sent home again to work on the farms and be of use.  Having such dark skin he wasn’t allowed into South Africa.

Bill was very good friends with his cousin Earnie WOODILL.  They met by chance playing on the same football team.

“I had one of the most lovely and memorable times of my life when I met Bill and Betty in December of 1992.” – Louise Dixon 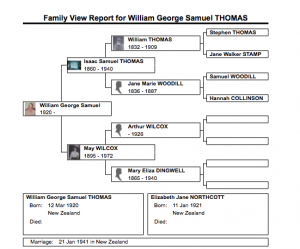 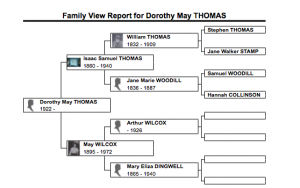 Bill Thomas talked about a sister Dolly.  This could be another child or it could be his sister Dorothy May THOMAS.  There are two other sisters whose names were provided by someone researching the DINGWELL family Pearle Roseline THOMAS and Eileen THOMAS.  I haven’t been able to find anything to suggest that they belong to this family