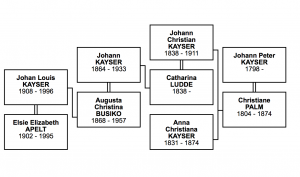 Johann Peter KAYSERs daughter Anna Christiana KAYSER was baptised in Die Evangelische Kirsche, Frankfurt am Main, Germany.  The baptism record mentions parents names etc. All other records are from the Lutheran church including the records for his son Johann Christian KAYSER who was born later.  This was a protestant church.  Perhaps the family explored religion.

FFM Gallusgasse No. 3, Germany.  The building and the street ‘Gallusgasse’ are no longer there.  It was located between towers from the ‘old’ Deutsche Bank and Landesbank