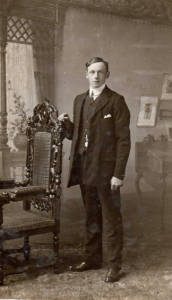 Between 1914 – 1918 Served in the Royal Artillery World War I.  Gassed but survived. Invalided out of the R.A. but completed his War service in a Costal Defence Battery in England. During World War II he volunteered as a civilian Air Raid Warden officially called A.R.P.’s. Demobed 23 July 1919, Released 15 January 1947

About Ethel May ANDREW