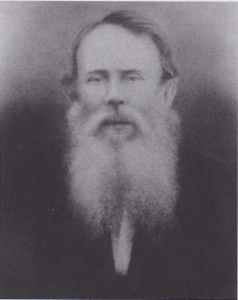 Christopher KEEGAN and Ellen COSTELLO.  (Patrick’s father was the only member to survive the Irish uprising of 1798.

Brought up Roman Catholic.  Left Ireland to escape the vocation of priest that his parents had planned for him.  Brought his children up in the Church of England.

17 March 1856 Arrived in Wellington, New Zealand.  From there we went to Nelson and from Nelson to the Bank’s Peninsula where we took a contract cutting timbre

All of the children were baptised at St Peter’s except Helena who was baptised at the Kiak about three miles south of Akaroa.  There is confusion over Helena’s parentage.

This home was on the southern boundary of the Maori reserve.  The small beach, Te One Poto, round the point beyond his cottage, was an ancient Maori burial site.  This home was purchased in 1860.  It was sheltered and sloped down to the sea.  1862 electoral rolls has the land is mentioned as a on a 20 acres section of land with house at Manuka Tahi, Akaroa, New Zealand

It was very hot in 1885 on the Bank’s Peninsula.  There were fires followed by heavy rain in May and June.  Many slips and floods.  Patrick lost two horses.

At the wreck of the ‘Oliver Laing’ Dad’s endurance as a swimmer kept him amongst the survivors.  He was two years at sea as a sailor, and visited many parts of the world.  With 16 others he left Liverpool in an old yacht and landed at Wellington on March 17th 1856.

His first expedition was on foot to what is now Palmerston North, he helped to make the first benched track through the Manawatu Gorge.  From there he went on by a Maori track to where Dannevirke now is.  Another Maori track took him down through the Forty Mile Bush and the Wairarapa to the Hutt where more road work was going on.  There was no settlement along the route, and he slept under there trees at night.  A few Maori villages were seen the Maoris were most friendly and helpful.

He saw the stirring times at the Collingwood Goldfields and at Bendigo and Ballarat in Australia, returning to rough it with the gold seekers in the early days of the West Coast of New Zealand.  In 1858 he was attracted to Akaroa where he took up a bush section and became a settler, and married.  With a broken thumb on one hand and a broken finger on the other he could not help with the milking.

When I first learned to count we had 17 cows in milk.  Mother used to milk the lot.  She also made the cheese, did the cooking, washing, sewing, and kept house.  There was never any help other than what the older members of the family could do.

Mother had 12 children before she was 36, and could then dance an Irish Jig wiht the best of them.  She was a wonderful singer and sang at her work, which cheered us on.  She passed away at 82.  ‘One of the Pioneers.’ Dad passed on 1897 at the age of 75.

As we grew old enough, we were pressed into service.  Dad used to clear bush and cut timber and harvest a little cocksfoot.  The firewood was hauled down to the beach with bullocks to where there was a beach of gravel, called Little Bay.

In fine weather a steam launch would leave a large punt which was to be filled with firewood.  At high tide the launch returned and towed the punt away.

The Bay was open to southerly storms, from which there was no shelter.  One day when I was about five, the punt was at the beach, when a terrific southerly storm came on.  Dad and another man rushed down to save the punt.  They sprang in and kept her off the rocks with poles, until the little point was weathered.  Then she seemed to jump from wave to wave, and disappeared in the storm.

Our little household had an anxious time which turned to consternation when our old Irish Grandmother shrieked, “Pat’s drowned!  Pat’s drowned.  Here comes the other man alone!”

We could see him crossing the paddock in the face of the gale crawling slowly on his face, and clutching the ground with his fingers.  It certainly looked as though a tragedy had occurred.  We were all stunned.  A great black pall seemed to hang over everything.  Presently, to our great relief, another head appeared in the skyline.  It was Dad, coming in the same manner.  They had got the punt safely into a sheltered bay and dropping anchor, had sum ashore.

Somehow I could not forgive that man for coming home first.  Young as I was I knew that a man should stand by his mate in danger.  One should not come out without the other.

Dad was 30 years older than my mother.  This was not unusual in the early days.  Where there were large families it put an undue load on the older members.  It was very much so in our case.  From the time we were seven or eight we used to go back into the bush in the early spring to find the cows where they had wintered and bring them home in twos and threes, with young calves.  We had to cut wood, carry water, milk cows, feed calves and pigs and repair fences.  We were always hardy and strong and never failed to tackle our job.

After Patrick sold the farm, the family moved to near by Rue Jolie Street Akaroa, New Zealand

9.1  KEEGAN, Patrick, Lyttleton Times 12 April 1862.  List of Persons claiming to have their names placed on the Electoral Roll for the District of Akaroa, Province of Canterbury, New Zealand