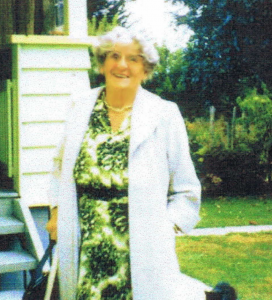 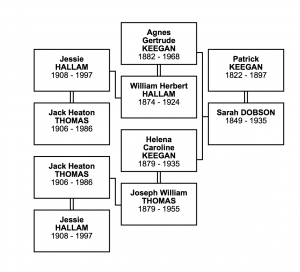 Born blind in her left eye.  Wore a glass eye.

Some time between 1897 and 1905 Agnes moved with her two sisters Ellen (Nell) KEEGAN and Helena Caroline KEEGAN to the Hawkes Bay area in the North Island. 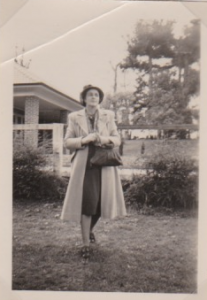 Agnes Gertrude KEEGAN would have likely witnessed ‘The Six O’clock Swill’ in Manawatu-Wanganui in 1911, a time when bars in Australia and New Zealand were ordered to close at 6pm nightly.

Agnes’ husband William Herbert HALLAM passed away 25 October 1924 in Auckland, New Zealand at the age of 50.  They had been married for 17 years.

Agnes’ mother Sarah KEEGAN nee DOBSON passed away the same year in 1935 in Auckland at the age of 86. 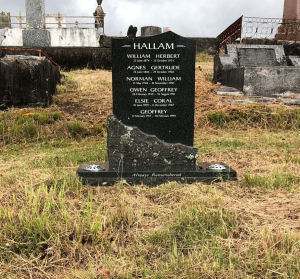 Agnes Gertrude KEEGAN (my maternal grandmother known as Nana), was born in Akaroa on 25 June 1882.  She was 10th in a pioneering family of 12, and was step-sister to my paternal grandmother Helena Caroline KEEGAN.  Her parents had a small farm and also attempted to run a timber mill in partnership with another family.  Thought times were hard financially, and the family finally went broke, and were also among tough families who lost their hard earned cash in the local pub, yet Agnes always looked back on her Akaroa years as very happy ones.  It sounded as though the families were very close-knit as a community, really helping one another.  The only fact of her childhood that I have, is that after her mother had milked their 17 cows by hand, she used to go door-to-door selling milk to the early pioneers.  That seemed to be her particular family task.

Her father Patrick, (if he was her father), was aged 61 when she was born.  Her mother was 33, but Agnes’s father died when she was only 14.  She remembered fondly his long white beard, and that he used to take her by the hand and walk long distances.  She knew the THOMAS family well in Akaroa, and loved to recall the days with my grandfather Joe.

About the time that some of the THOMASs shifted up to the Hawkes Bay building road, and buying farms, some of the KEEGAN family also journeyed up there, perhaps in search of work.  Agnes’s brothers Pat and Mike were among these migrants.  Pat went as far as Bay of Plenty, while Mike set up an oxen-pulling business in Hawkes Bay.

So three of the sisters, Agnes, Nell and Lena (my other grandmother), went to live in Palmerston North.  Nell met and married Stan WHITTA who was with the THOMAS family at Horoeka, Lena married Joe THOMAS also at Horoeka and Agnes met and married Herbert William HALLAM, an Englishman who was a surveyor designing roads that could well have been the ones that the THOMAS brothers were forming.

While Lena and Nell held their weddings in Dannievirke, Agnes was married to Bert HALLAM at St Peter’s Church in Akaroa on 3 April 1907.  However they settled in Palmerston North as their first child (my mother) was born there in 1908.

Agnes and Lena were very close, and both were music and singing teachers.  They sang duets together as soprano and alto, and raised money for various patriotic causes.  They were constantly involved in concerts together, and an evening was happily spent if singing together around the piano.

by 1911 or early 1912 Agnes and Herb had moved to Pair where he was involved in designing roads at the time that the Hauraki Plains were being formed.  By this time they also had a son, Claude born 25 September 1910 in Palmerston North and then Geoffrey, another son was born in Paeroa on 11 February 1912.  They lived in Hill Street for about 3 years and Agnes became involved with the music and choir in the Methodist Church.  They moved on to Auckland where eventually Constance was born on 24 June 1916.  The family home was at 3 Flower Street, Mt Eden, Auckland.  Today it is just an industrial area.  The family later moved to Shackleton Road, Mt Eden.

Disaster hit at an early stage in Agnes’ marriage as her husband Herbert died of double pneumonia in 1924 leaving her with four children whose ages ranged from 8 to 16.  There was no welfare system at that time, and Agnes was forced to find work.  She earned her LTCL at music and did what she could to earn a living teaching piano and singing, while Jessie left school and found a job in the city.  She taught at the Lewis Easy Building in Queen Street which was probably New Zealand’s most leading music tuition centre and retail outlet at the time.

Agnes was born blind in her left eye, but somewhere early in her life she had been given an artificial eye.  This was a glass eye rather like a marble, and which she took out at night and placed by her bedside!  In the morning she held her eyelids apart and popped it in, much to the horror of those of us who were her grandchildren!!  When she got older, sometimes it was in crooked, so that she seemed to be looking in two directions at the same time.

In spite of hardship, and living out a long life as a widow for most of which she had no home of her own, Agnes (always known as Gert), maintained a hearty sense of humour.  She would throw her head and laugh as loudly as any in the room, and loved to reminisce.  She was indeed a rmoantist, and great at fantasy.  She took great delight in telling us grandchildren bedtime stories, but always without a book.  She simply just made them up.  She would sit on the bed and ask “What will our story be about tonight?”  And if we answered ‘rabbits’ she would invent a story that would go on and on and have any child rapt in the adventures of it.  She would have made a marvellous author, but to my knowledge did not write any books.

When I was about eight years old, I stayed with her (Nana) for the first time.  She was living with daughter Connie at 8 Mark Road, Mt Albert, as Connie had also lost her husband at a very young age and had two boys Bruce and Neil, who were one older, and one younger, than me.  I remember that while the boys went to school, and Connie went to work in a fruit shop, Nana took me for rides on the trams, she took me to the movies for the first time in my life – not once but twice, she took me on the Ferry over to Devonport and back, and also took me on a tram to my other cousins at Glen Eden.  Then she marched me down Queen Street in the big city, showing me which side of the crowd to walk on, and let me spend some money in Woolworths, McKenzies and McDuffs.  I now understand something of what it must have cost her for all of these treats, but no way did she give any indication at the time.

In the evening she and Connie made many, many jars of strawberry jam, using fruit that was not fit to be sold where Connie worked.  It was also the first time I had ever tasted strawberry jam.

Agnes indulged in anything musical (yes, she also took me on the tram on Sunday morning to Uncle Tom and the Sankey Singers).  She went to live theatre as often as she could, and eagerly followed the careers of our country’s best singers.

Agnes had no lack of self esteem about the eye but would laugh and say “well, guess which one is looking at you” and on her next visit to the bathroom she might think to make an adjustment.

She spent most of her long life living with Connie, though stayed brief periods with my family on the farm and with other relatives.  She always arrived with lollies in her black bag – something I eagerly awaited, and which we did not have at home in those days.

Though having been a staunch Methodist, and sung and led Methodist choirs for many years, somewhere along the way Agnes became an ardent theosophist, well before the days when this new age kind of thinking was even known.  She believed that all paths went to Heaven, and avidly read Hindu writings, Mao Tse Tung, the Koran, and many heavy books of different philosophies and of astronomy.  Reading was a favourite pastime along with crochet.  She attended heavy debates on these subjects.  Though such a romanist in her children’s stories, her personal reading was very heavy, and she could hold a good conversation on any subject.

In later life, as her good eye failed, she became associated with the Foundation of the blind, and even lived in the Blind Institute at Parnell for a while.  Here she learned a little braille.

She also suffered extreme rheumatism in old age.  Her fingers became gnarled and crippled, yet to keep her circulation she continued to crochet, though eventually having to use wool and make larger articles, such as knee blankets, instead of fine crochet she had done all her life.

Her love of music never waned, and if I was practicing piano leaving out, for example a B Flat, she would have to get out of bed and come and point out the needed correction.

Agnes Gertrude lived to the grand old age of 87 years, in spite of a very long widowhood, and with no home of her own for most of that time.  She was finally put into a rest home in Auckland, where she died on 29 June 1968.  Though she had a long, lonely life, she never appeared to be unhappy with her lot.  She was cremated and her ashes buried at the Waikemute Cemetery, Henderson, in Auckland.