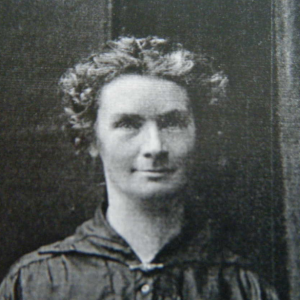 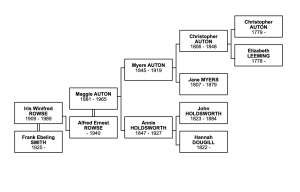 Maggie’s mother Annie HOLDSWORTH was eight months pregnant on the voyage to New Zealand so Elizabeth’s eldest sister Janey took on a lot of tasks.  This included making bread on board the ship 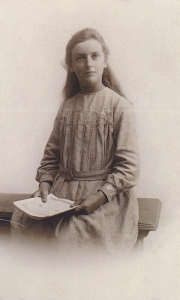 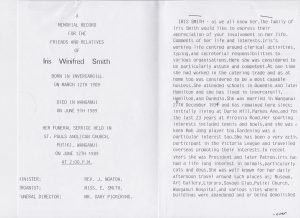 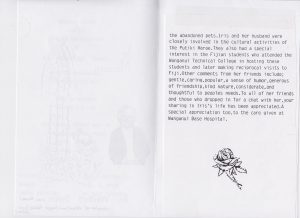 Iris Smith – as all knew her.  The family of Iris Smith would like to express their appreciation of your involvement in her life.

Comments of her life and interests:

Iris’s working life centred around clerical activities, typing and secretarial responsibilities to various organisations.  Here she was considered to be particularly astute and competent.  At one time she had worked in the catering trade and as at home too was considered to be a most capable hostess.  She attended schools in Dunedin and later Hamilton and she lived in Invercargill, Hamilton and Dunedin.  She was married in Wanganui 26 December 1934 and has remained here since; initially living at Durie Hill, Parkes Ave, and for the last 23 years at Virginia Road.  Her sporting interests included tennis and bowls, and she was a keen Man Jong player too.  Gardening was a particular interest too.  She has been a very active participant in the Victoria League and travelled overseas promoting their interests.  In recent years she was President and later Patron.  Iris has had a life long interest in animals, particularly cats and dogs.  She was well known for her daily afternoon travel around such places as; Museum, Art Gallery, Library, Savage Club, Putiki church, Wanganui Hospital and various sites where buildings were abandoned and or being demolished the abandoned pets.  Iris and her husband were closely involved in the cultural activities of the Putiki Marae.  They also had special interest in the Fijian students who attended the Wanganui Technical College in hosting these students and later making reciprocal visits to Fiji.  Other comments from her friends include; gentle, caring, popular, a sense of humour, generous of friendship, kind nature, considerate, and thoughtful to peoples needs.  To all of her friends and those who dropped in for a chat with her, your sharing in Iris’s life has been appreciated.  A special appreciation too, to the care given at Wanganui hospital.