After 1863 Labourer and Shepherd

Two other children who died in infancy

To Brisbane, Queensland November 1863 on the Ship Fiery Star

Both Samuel and Eliza had worked at the Cotton Mill and were most likely effected by the Cotton Famine 1861-1865.  The Lancashire, Cotton Famine began when the blockage of Confederate ports by the North during the American Civil War resulted in a shortage of raw cotton for processing by the many mills of Manchester and the surrounding region.  Glossop which was where Samuel and Eliza resided was transformed from a cottage industry to mechanisation and the development of factories.  Mill owners over produced during the 1850s causing mass unemployment later.  This caused change in the social conditions.

Queensland, Australia. with it’s hot and humid conditions was being considered for cotton mills so those who had worked with Cotton were encouraged to immigrate

The ship Fiery Star was overcrowded during it’s voyage from England to Brisbane in 1863.  The maximum number of passengers was 470, but 554 emigrants were noted on arrival.  Although the captain and surgeon were praised by saloon passengers, others were very unhappy.

The sale of alcohol from a storeroom in the single females quarters encouraged harassment of these omen by inebriated men.    It was also noted that married men were unable to protect their wives and children from drunken persons.

Established 1864 designed to service all of Queensland.  Built along the lines of the British poor house where you put out of the public eye old or poor people unable to care for themselves due to illness or infirmity.  There were no pensions in those days so the council built them a town on Stradbroke Island.  The people who were mostly old pioneers from England who had come and worked in the Australian bush.  Unwanted by both the Brisbane hospital and colonial government, the institution was sent to Dunwich because of the availability of vacant buildings.  People were therefore removed from the main city and moved to Stradbroke Island.  Anyone who was unable to keep up with the demands of society was admitted and most accepted their fate because they had become ‘institutionally dependent’.

The asylum occupied most of Dunwich.  There were buildings with wards as well as a kitchen, bakery, laundry and other service buildings.  It had a public hall, recreational facilities. 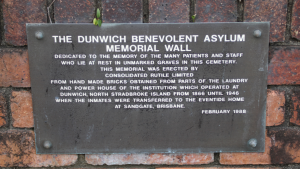 click here for Story and Video about Samuel CHARLESWORTH

To Brisbane, Queensland November 1863 on the Ship Fiery Star

26 October 1863 on the voyage from England to Australia