Information about the HEWITT family being added during 1918

Edward’s Intestate Letters of Administration were filed at Wellington Court on 19th October 1918.  A small postcard, set the day before his death in the Dardanelles, to his friend Harry Marra, leaves all his property and possessions to his brother Gordon, apart from 100 pounds to go to a friend. 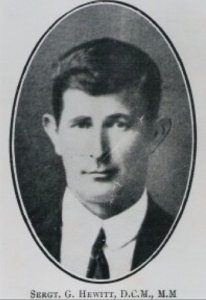 6 feet and a half inches

1916 – 1916 part of the Egyptian Expeditionary Force and was first admitted to a UK hospital in Cairo on 13 January 1916, then to New Zealand General Hospital on 18 January with illness that couldn’t be diagnosed.  He had typhoid symptoms and chest troubles.  He was transferred to the New Zealand Aotea Convalescent Home on 22 March and was a very sick man at the time of his discharge to base 5 April 1916

28 June 1916 rejoined the 1st Battalion of the Canterbury Regiment and was posted to the 13th N.C.W. Coy.

19 July 1917 admitted to No. 51 General Hospital noted as hit during courageous action.

28 August 1917 Discharged from General Hospital and returned to Base in France rejoining his unit in September.

12 September granted one month’s agricultural leave at Codford until 12 October and he marched into sling ex Codford on 17 October.

24 October 1918 he went back overseas rejoining his battalion on 2 November in France.

1 February 1919 departed for New Zealand on ‘Hororata’ arriving on 18 March.

Returned to Waimana, New Zealand after the war to his land off Raroa Road and took on the task of clearing and fencing it.  A respected dairy farmer and breeder of Jersey cattle, breeding under the name of ‘Brooklands’.  He supplied mile to the Waimana Cheese Factory.  Gordon often helped out neighbouring farmers with cows in difficulty either bloating or calving.  He was an active member of the Waimana community, on the Board of the Waimana Cheese Factory.  He was also a Trustee of the Waimana Estate and concerned about all community matters, such as road and county affairs and a Justice of the Peace until he died.  Often people would call on him, or he would go to see local Maoris at their homes to witness their signing of documents.  All of the Maoris in the area had a great respect for him.  He had worked hard all of his life and expected his employees to to work hard also but was remembered as being a fair and kindly man and he would help anyone in need.

Children of Kathleen Iberia WARDLOW and George NIELSON:  Jessie NIELSON who was raised with her grandmother and Charles NIELSON with his mother.  The two children didn’t have much contact with each other until they met at school.  They didn’t regard each other as siblings by that time. 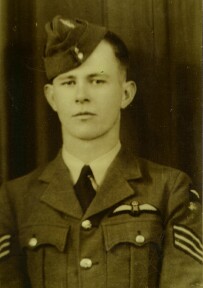 20 January 1940 forms filled out.  Parental consent forms weren’t filled out until June.  Ted Was only 17.

2 July 1941 Embarked for service in the East

Note:  Amy’s great grandparents Alexander (Sandy) McIntosh who was born in Glasgow in 1799 and died in Christchurch 1881 and his wife Margaret MACFARLANE (1801 – 1881) were the first settlers of McIntosh Bay (now Menzies Bay) on the north side of the Bank’s Peninsula, New Zealand.  They arrived in New Zealand in 1840 with a large family including triplets.