26 June 1866 On the ship ‘Wansfell for Brisbane, Queensland, Australia. It departed from Southhampton, England. Adam GILMORE was one of the ommittee members that represented passengers on the ship commending the ship’s captain. The ship transported immigrants England, Ireland and Scotland. Of the total 225 immigrants, 172 were Irish. Among the single girls were a large number of domestic servants. 60 were advertised as being for hire on arrival of the ‘Wansfell’. The voyage was smooth for that period with no passenger births or deaths recorded on board.  Adam and Isabella were assisted immigrants.

There is a reference in the Brisbane Courier Mail 29 December 1892 to an event at the Petty Debts Court.  Annabella summoned George Manley Smith and W Lane who traded as Smith and Lane for 30 pounds damages.  The defendants kept a fruit shop in Stanley Street and had encouraged Annabella to purchase the fixtures, stock in trade and goodwill for 50 pounds when net returns were said to be 1.10pounds to 2 pounds per week.  She felt that this representation was false so claimed 30 pounds damages for loss sustained.  The defendants denied indebtedness.  Annabella stated that she made nothing out of the business, the grown takings in the shop for six weeks being about 10 pounds. 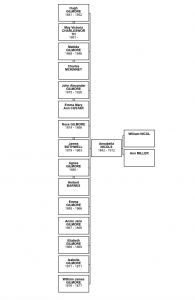 Link to video about Anabella NICHOL