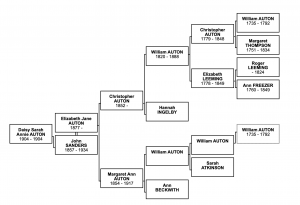 Abt 1900 Joseph William AUTON emigrated to Rockhampton, Queensland, Australia with some of his brothers.

About 1905 Elizabeth’s parents and siblings emigrated to Australia.  Elizabeth lived with her Uncle William AUTON

Annie Louisa AUTON wrote to Elizabeth AUTON after the death of their mother asking Elizabeth to write to Sarah AUTON informing her of her mother’s death.

Previously married:  Louisa who died in 1920

Daisy Sarah Annie AUTONs father could have been Christopher AUTON – father of her mother Elizabeth AUTON – There were incest charges regarding another one of his daughters and Daisy was born in his home.

Unusual cause of death.  Marasmus is a condition where progressive wasting and emaciation occurs often due to starvation