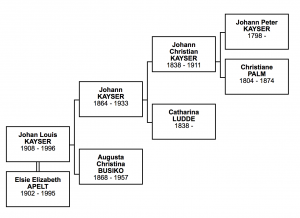 There are references to Johan Louis KAYSER living 1930 – 1933 at Robertson Street, Toowoomba, Queensland, Australia.  He was living in Toowoomba when Australians were suffering through the Great Depression.  He would have voted in the federal election 1934 perhaps hoping for change.

Johan Louis KAYSERs wife Elsie Elizabeth KAYSER nee APELT passed away 18 June 1995 Brisbane, Queensland, Australia at the age of 92.  They had been married for 68 years.