Charged for riding furiously in Lavaud Street, Akaroa being in a state of intoxication and riding on the footpath.  Fined 42s

Had a moustache to cover big top lip

Information about May WILCOX

Previously Married:  George Lewis STEWART who died in the war

May WILCOX had previously been married to Isaac’s son Samuel’s friend George.  Samuel and George were both killed in the war.  May was 35 years younger than Isaac and she already had three children when they were married.

Children of Isaac Samuel THOMAS and May WILCOX 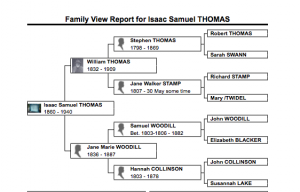