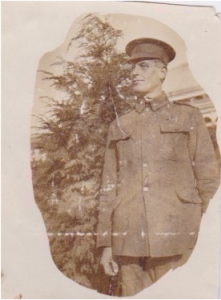 Click here for video and story about Joseph William THOMAS

Joe was keen on boats and as a child spent most of his time boating or rowing on the Akaroa harbour. When he was a boy a tidal wave swept into the harbour and flooded the lower shops. Joe found a butcher’s brine tub floating. He hopped into this and had his small half brother holding the tub with a piece of flax. However when the wave receded, half brother Gordon let go and Joe floated out into the harbour! Eventually someone saw him and rowed out to rescue him

Joe left school at age 12 and went away for several days on a fishing boat. Nobody knew where he was until his mother found him on Akaroa wharf smoking a pipe. Some time after this he travelled up to Hawkes Bay where he got work bush-felling, shearing and cutting grass. He decided to go back to his home, and only got as far as Wellington where he got a job on a sailing ship. After a couple of years he had made voyages to several parts of the world and had gained an A.B. certificate. He was unable however, to get a berth back to New Zealand without signing on for the return trip. At the time of the outbreak of the Boer War, he was a deck-hand on a small steamer trading around the coast of England.

Volunteers were urgently called for, and Joe at once offered his services in the Mounteds, having no desire to be a footslogger. His choice was the Imperial Yeomanry. He passed all preliminary tests and was accepted subject to a satisfactory riding test. When this took place Joe came along dressed in Jack Tar rig plus a leather belt from which hung an ugly looking sheath knife. The volunteers to go through the riding test with the exception of Joe were all English lads. Most of them were from town jobs and hadn’t done much riding.

Joe was allotted a mount that had thrown the other boys one after the other. Joe however stuck to his mount and rode to a standstill. Having passed the final test, he then went into camp to undergo his training. During the first night his ugly looking sheath knife, which none of the other boys liked the look of, mysteriously disappeared and he never saw it again.

Joe arrived in Africa just before orders had been received granting him a transfer from the Imperial Yeomanry. When reporting to the Captain, Joe was asked if he had a horse. He replied “No,” but intimated that if necessary he could get one. That night he stole along quietly to the Yeomanry Horse Lines and helped himself to three horses and tied them up in different places on the New Zealand lines. He thought that at least one of them might not be recognised. It transpired that none of them were, and until all the horses were handed over to other units he had the three horses to attend to!

The tale is also told that some considerable time before going to Africa, Joe was desperately ill with enteric fever, so ill that his doctor thought he could not possibly survive. Other doctors were called in for a consultation. One of the newcomers, after examining Joe thoroughly, remarked, “Poor boy, I am afraid he is going.” Joe had been unconscious and had not spoken for some considerable time and obviously had regained consciousness and had understood what the doctor was referring to. He slowly opened his eyes and drawlingly said, “Going eh, I’m damn sure I’m not.”

Joe lived to return to New Zealand in the troop ship “Tagus.” On ship he had a fierce encounter with another chap in the mess-room. The sea was rough and pitching quite a bit, but Joe had better sea-legs than the other, so was the victor.

After he came back to New Zealand he began courting Helena Keegan at Akaroa on the wharf, but young Gordon insisted on hanging around so Joe picked him up by the scruff of his neck and the seat of his pants and dropped him in the harbour. He later had to jump in and save Gordon from drowning. Gordon later said that all he could remember of the incident was Joe wiping the water out of his eyes with a dirty sock.

In 1915 (though not eligible by age which he lied about), Joe enlisted for World War One, together with his half brother Gordon Hewitt. The people of Douglas gave them a farewell and they each received a pair of binoculars. They were in the trenches together and Joe was hit by the Germans. Gordon was a bit further along the line, so he put his helmet, gun and binoculars down, and went along the trench to see Joe carried away to the Red Cross Station. When Gordon returned to his place in the trench, his helmet, gun, and binoculars had been blown up, right at the spot where he had been standing.

When Helena died so suddenly it was an extreme shock to Joe but also his son Jack and daughter in law Jessie. Joe simply ran away unable to face his loss. Nobody knew where he was. Jack eventually left Jessie with two young children and a farm worker for a month, while he looked for Joe. He finally found him in Weymouth, near Manurewa in Auckland, which interestingly, is where he departed from for the war. He was in a drunken sleep under a hedge. He didn’t ever return to farming but left the farm and it’s debts to Jack and Jessie and returned to the sea which he loved.

When Joe left Taranaki, it was by boat that he apparently rowed solo to Kawhia, with his dog and a few possessions. It was a rough trip, but Joe had been a good oarsman from his childhood when he and brother Gordon Hewitt won rowing championships in Akaroa. As the story goes, he tipped some of his possessions overboard when it got too rough and he was in danger of not making it. But after walking up onto the beach at Kawhia, he roamed back down the coast and fetched the belongings that the tide had washed up. 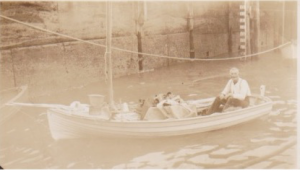 He acquired a one-roomed batch on the sea shore of Weymouth, painted black with pitch. It was right on the water’s edge, perched on stilts, with the water washing under it at high tide. At one point he had an argument with the town council who wanted him to pay rates, but because his batch stuck out over the water, he was indignant and refused to pay. The batch also had a “long-drop” toilet system into the water! When the council chased him about the rates, he made sure he was living out at sea in his boat. Throughout his whole life he loved the sea.

Click here for video and story about Joseph William THOMAS