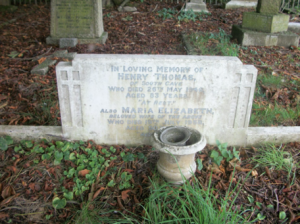 Thought to date from the mid to late 18th century, this house is architecturally similar to Market Place Farmhouse.  Nunnery House is of stone, previously lime washed, it is double fronted, with shutter ties to the upper windows.  On the right is a collection of inserted bricks, after the removal of what may have been a post box.  Henry THOMAS lived there at one time.  He built the cottage next door where he died in 1946.

In Loving Memory of Henry THOMAS of South Cave who died 26th May 1946 Aged 83 years “At Rest” Also Maria Elizabeth beloved wife of the above who died 19 July 1958 aged 90 years Reunited.